In many ways, parking is one of the best things about urban biking.  That is, in comparison to parking a car, it is often 10 times easier to park a bike. In neighborhoods where parking is around $10/hour or $150-$225/month, it’s nice to be able to ride my bike (for free) and park it (for free).  That being said, there is much room for improvement in bike parking all over this fine city.

I am very fortunate in that the building where I work has a bike rack in the main entryway. That’s right, I have free, indoor parking about 50 feet from the door to my office.  My bike is protected from the elements all day, and just having the bike rack indoors makes bike theft much less likely.  I have to commend the Rhode Island Foundation for putting this bike rack here. It’s also good for them, because it means I won’t be tempted to bring my bike into my office to protect it from the weather and theft.

Here’s the bike rack – mine is the silver Cannondale with the funny seat (I’ll dedicate a later post to my funny seat). 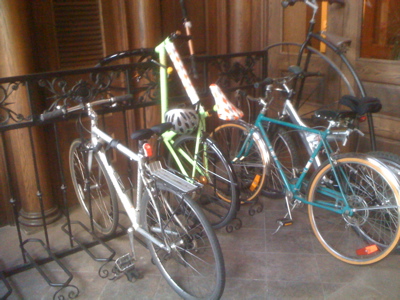 Hmm, why is that green bike parked at such a funny angle? Well, I’m very happy to have this bike rack inside my office building, and it’s a good-looking bike rack, but it’s poorly designed.  It has these wheel holder things, that just get in the way.

As you can see from the second picture, I have to push my fork through the vertical bars (which are too narrow) in order to properly lock my frame to the rack.  This bike rack is designed on the mistaken idea that a cyclist just needs to lock their wheel to the rack.  Take a look at a few bike racks in any major american city (especially near a college campus) and you will see many lonely wheels locked to bike racks, their frames removed and carted away.

A proper bike rack allows you to pull your bike all the way through and lock both the frame and the wheel to the rack.  I have locking wheels on my bike (from pinhead components, btw), so I only need to lock the frame. I guess I could get away with locking just my wheel since it in turn is locked to my bike, but I feel much better just locking my frame.  My local grocery store uses a rack like the one below. It’s popular design – not the best, but better than most you see around town. 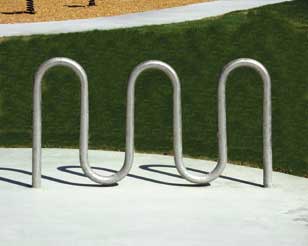 I emailed them asking for more bike parking and they finally added a longer version of the one below. 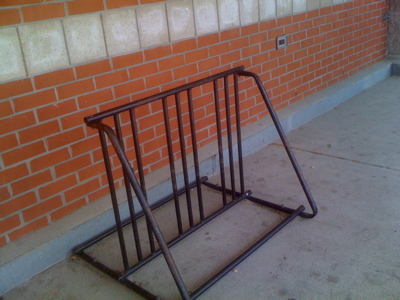 I don’t like this kind, because unless you get on the ends, the only way to use this rack properly is to prop you bike up and over it. This can scratch the underside of you bike, lead to rust and generally be a pain.

I took the picture of this rack at the big Price Rite grocery store is on the other side of town.

That’s a big store to only have the one small rack. Of course, when I went by the other day, the rack was empty as you can see. Instead, someone had locked their bike to a railing a few feet away. 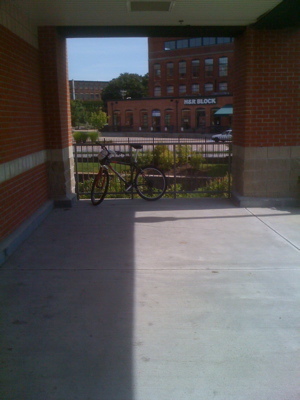 There’s a few other places in Providence that desperately need a bike rack. The Hope Street & Rochambeau are has one or two hitching posts, but 7 stars bakery doesn’t have anything. A friend of mine emailed them a couple months ago about this and got this response:

> Thanks for bringing up the lack of bike rack.  We’ve talked about it
> before, but haven’t followed through.  I’m going to address it right away!
>

Almost 2 months later and there’s still no bike rack at 7 stars. There’s not many sign posts to lock to right around there, so the lack of a bike rack is annoying. Bike racks aren’t cheap, but they are certainly cheaper than maintaining a parking lot.

I love Adler’s Hardware on Wickenden street. I highly recommend shopping there when proprietress Betty Adler is in the store. If she’s there, I recommend coming up with a question that will take her a long time to answer, that way you can bask in her beautiful accent – a hybrid of Rhode Island and Germany. Btw: she’s the cutest kristalnacht survivor you could ever want to meet (pic #5). Adler’s even has a large bike rack. Check it out: 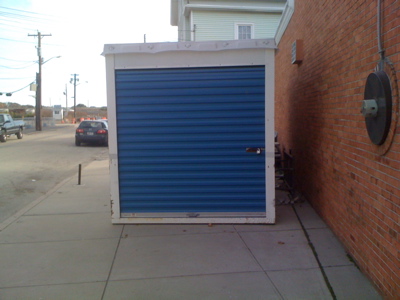 It’s right there – behind the giant box.

completely useless. Oh well. I’m sure the box will be moved some day.

On Veterans Day, I took a ride on the Blackstone Valley Bike Path. It’s my favorite of the major bike paths in Rhode Island. I’ll have to devote a full post to it some day soon. It goes along the Blackstone river and canal, with several lovely bridges. In the next few years, it will connect with a bike path in Massachusetts and you’ll be able to bike from Central Falls all the way to Worcester without riding in a street. Right now, the path ends in Woonsocket at a parking lot. Also in the parking lot is this bike rack: 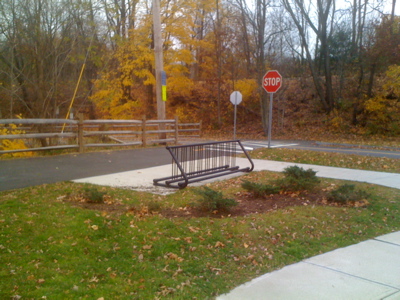 It’s one of my least favorite designs for a bike rack – like the one at the Price Rite.  But that’s not the problem. This bike rack is at the end of a bike trail, right next to a parking lot. There’s nothing else around, no store, no park, no apartments. There’s no reason anyone would need to lock their bike here. If you drive to the bike trail in a car, your car is right there, so you don’t need to lock your bike. If you bike to this end of the trail, there’s nothing around that you could walk to, so you’ll just turn around and go home.  I’d love to have seen the planning process that resulted in the placement of this bike rack. I’m sure someone was thinking, “well, it’s a bike trail, so we need to put a bike rack at the end of it.” Oh well.

I’ll leave you with two more photos of parking in Providence. First, due to a lack of bike parking, cyclists are forced to do things like this: 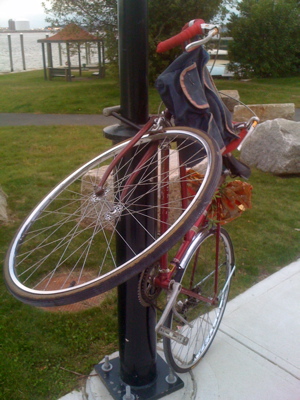 Meanwhile, in Kennedy Plaza, some people get to park on the sidewalk:

What do you think? My guess is that it belongs to a RIPTA employee. It even has out of state plates, but never gets a ticket.

I’ll take more pictures of ridiculous bike parking situations in the coming weeks and months. Feel free to send me some too.