Worst. Intersection. Ever. (gets worsterer)

I’ll get to that worst intersection in a minute, but first a couple of illustrative examples of snow removal at sidewalk that feature a corner curb cut. 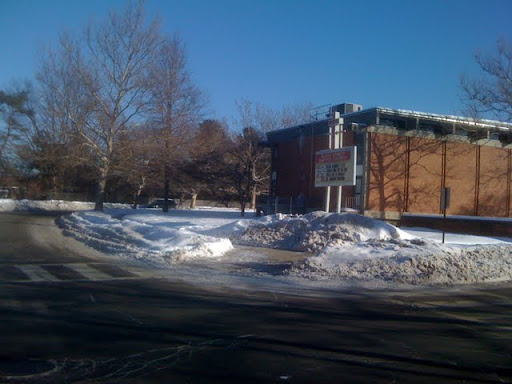 How Not To Do It: 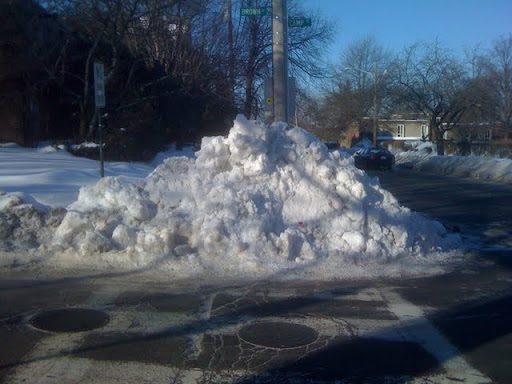 Olney Street National Grid building just leaves a big pile for you to climb over.

These two examples are from the corners of Olney and Camp streets (the pictures were taken the first week of February, a couple days after a major snow storm). The church seems to understand that it’s not enough to clear the snow from your sidewalk if the corner is blocked. They’ve blazed a wide swath across the corner curb cut in order to allow pedestrians to cross the street with relative ease. Meanwhile, on the opposite corner, National Grid did a half-vast job of clearing the snow from their sidewalk, then they just left the giant piles on the corner thus making it difficult to use the sidewalks. As people who write letters to public radio stations like to say, “Shame on you!”

I’ll admit that shoveling out a corner can be quite difficult. The city plows tend to dump more snow there than anywhere else. However, the people who don’t shovel out their corners seem to have no problem shoveling out their driveways which contain a much larger volume of snow. But hey, they’ve got to get their cars out so they can get to work, right?

On to the WORST INTERSECTION EVER. I did a full post on this intersection a while ago. Feel free to check out that previous post so you can fully appreciate my fury. To briefly summarize, in order for a pedestrian to travel from the University Heights area to Providence Station, one must take this route if one wants to observe the marked pedestrian crosswalks: 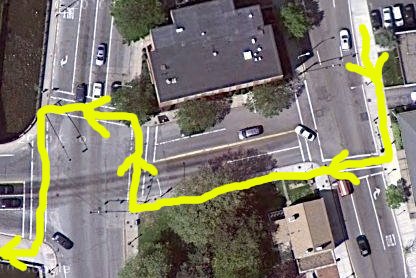 Just like water seeks the easiest way downhill, pedestrians seek the shortest distance between two points and take this route: 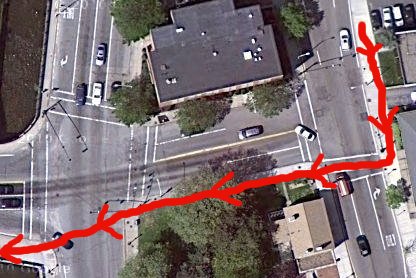 What could make this anti-pedestrian monstrosity even worse? 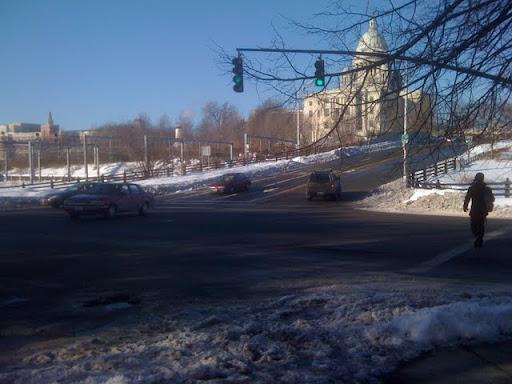 3 feet of snow and ice thus providing zero access to the sidewalks! 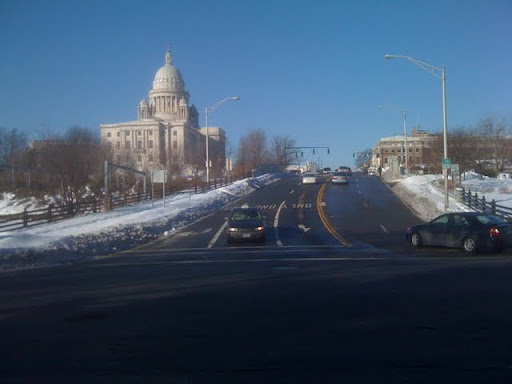 You can just barely see a pedestrian up by the traffic light on the right side of the road (not observing the AWORS BRIML SYCJOW rule!) On the left, the sidewalk is completely covered in several feet of ice and snow. There’s a little bit of a footpath worn into the snow, but that has become an icy mess. I like to complain about people not shoveling the sidewalk in front of their homes, but I think that the worst offender in this regard is the city. Sure, the pavement around City Hall is cleared of every last molecule of snow and ice, but there are many examples of uncleared sidewalks on the bridges, traffic islands and other places around town. So I say, “SHAME ON YOU, CITY OF PROVIDENCE!”

The good folks at Roger Williams National Memorial at least make an effort: 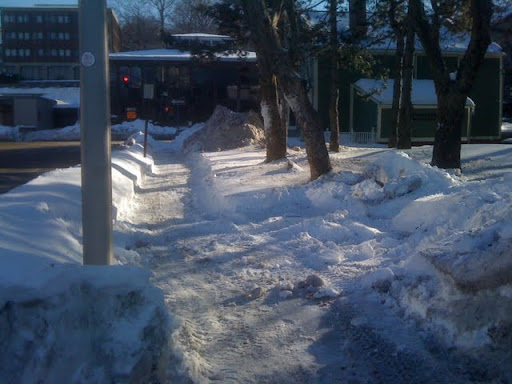 That makes me feel a little bit better, although this well-plowed sidewalk turned into an icy lake further down Canal Street.

I have a quick bit of stupidity left to mention. On this same walk to work, I came across this truck trying to make his way up Star street. 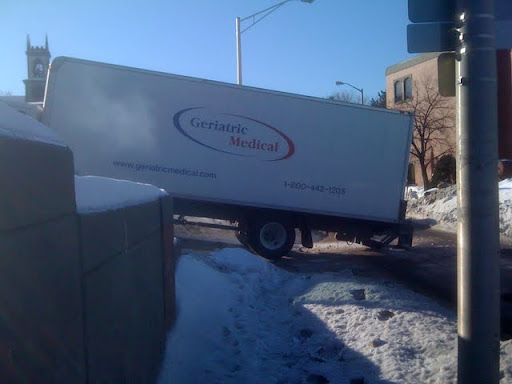 Star Street reaches near-San Francisco levels of steepitude. Plus it’s very narrow (but not marked as a one-way, oddly enough). On a good day, I wouldn’t recommend driving a big truck up this hill. On an icy day, well the truck was spinning its tires for over a minute, backing up into N. Main before trying to get up the hill. This would block traffic for a while until the truck go a few feet up the hill and a couple of cars would try to scoot past before the truck slid back into N. Main and blocked the street. I was expecting a disaster at any moment. I knew that I didn’t want to walk behind this truck, so I crossed the street in the middle of the block and walked through a snowbank in order to avoid any potential hazards. The blocked motorists were remarkably sanguine, with only a few honks. After a few tries, the truck’s tires got purchase and it made it up the hill. 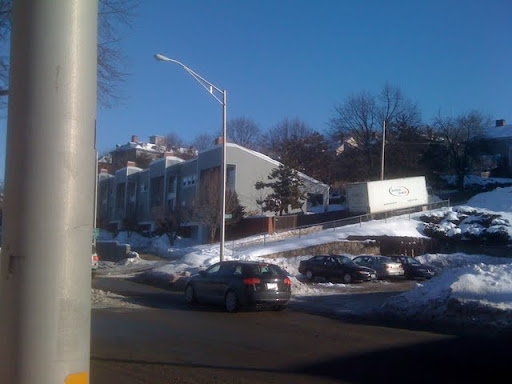 I was happy to be back on my bike the next day. I hate walking.

This entry was posted in Walking and tagged snow removal, walking. Bookmark the permalink.

5 responses to “Worst. Intersection. Ever. (gets worsterer)”