If you drive a car, ride as a passenger in a car, ride a bike on a road where cars also travel, or live near a street where there are regularly cars, then I would highly recommend Tom Vanderbilt’s Traffic: Why We Drive the Way We Do (and What It Says About Us) Spouse got this for me shortly after it came out. [She’s an amazing woman, that Spouse is.] Also, you should read Tom Vanderbilt’s Blog, How We Drive.

Tom Vanderbilt (what’s that, I can call you “Tom”, well okay, if you insist). Tom recently wrote an article for Outside Magazine (brought to my attention by reader, V) on some extreme bicycle commuters and the perceived strife between cyclists and motorists. aka “The Bikelash.” Tom doesn’t seem to see the issue as motorists vs. cyclists, but more us vs. them

We know that merely perceiving someone as an outsider is enough to provoke a whole range of things,” says Ian Walker, a researcher at the University of Bath who specializes in traffic psychology. “All the time, you hear drivers saying things like ‘Cyclists, they’re all running red lights, they’re all riding on sidewalks,’ while completely overlooking the fact that the group they identify with regularly engages in a whole host of negative behaviors as well.” This social categorization is subtle but dominant, he points out.

In other words, cyclists and motorists perceive themselves as distinct groups and perceive the “other” as monolithic. This is why I get unsolicited comments from acquaintances along the lines of, “you know, I’d respect cyclists more if they weren’t always running red lights and stop signs.” To which I respond, “Yeah, I hate those people.” Left unsaid by me: “And what do they have to do with me?  Would you like me to bring up the dozens of motorists I see every day breaking all sorts of traffic laws? What do they have to do with you?”

Tom’s article references a bike blog I hadn’t heard of before, the creatively titled: Jeff’s Bike Blog. Jeff specializes in video taping all of the cars that nearly hit him. I you are not currently “being Charlie Sheen” and feel like having some vicarious heart attack moments, I suggest you watch some of his videos.

Like this one that resulted in the cyclist getting a ticket:

Or this one where a passenger actually opens his door as he passes the cyclist.

And that’s why we need laws to protect cyclists from harassment.

Speaking of which, I know I’m always promising not to do it, but it’s time for a

So, I’m rolling down Canal Street, towards Steeple/Exchange. I’m still aways away from the traffic light when I see it turn yellow, so I stop pedaling and coast up to the light. A car pulls up behind me, and there is no one in the middle lane or the far left lane. For those of you from outside of the city, this is a three lane, one way street. At the intersection, the two right lanes are for turning right and the left lane is for going straight. 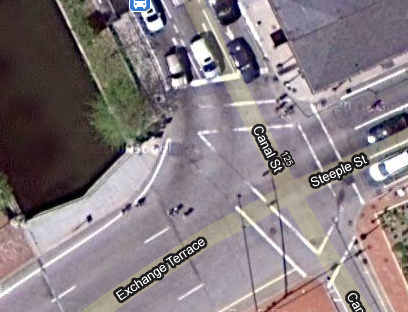 I’m where that silver car is, I’m pretty sure it’s a Mini Cooper (yes, I can spot a Mini Cooper from space). Just like a Mini, I’m taking up an entire lane, because it would be unsafe for a car to pass me without changing lanes. A car rolls up behind me, well after the light has turned red.

Without turning around, I point to the “No Turn On Red” sign right next to me. I get another honk. I turn around and inquire as to the driver’s reading ability. He responds, “If you weren’t in front of me, I could have made the light.” This is A. untrue, and B. irrelevant. I respond, “Well go around me if you’re in such a hurry,” pointing to the empty lane next to him. “I can’t,” he says as another car approaches the intersection and eventually gets to the stop line in the middle lane. (If he had spent less time honking and kvetching, he would have had plenty of time to change lanes).I roll my eyes, and get ready for the light to turn green and prepare myself for an escape in case the driver gets “assaulty.” When the light turns green, I turn right and get into the second lane from the right on Exchange Terrace. The driver makes his right turn and pulls all the way over to the far left lane. If he was going to that lane, he should have started from the middle lane on Canal Street. I continue on to work.

I relayed this story to Spouse later in the evening and she came up with the perfect retort, “I’m sorry, you’ll just have to realize that when you drive your car, sometimes there will be another vehicle in front of you that won’t feel like running a red light.”

The incident described above happened earlier this week. Then today, I had another similar incident. I was stopped at a red light on Allens Street in South Providence. I was as far to the right as practicable given that much of the right hand part of the road is covered in sand right now. As I was waiting for the light to turn green, a car came up behind me and honked at me. Evidently, I was in “their way.” I was slowing them down no more than if I had been in a car. While the light was still red, they pulled around me and turned right (there was no prohibition for doing so at this intersection). I smiled and waved and said, “Hey, how ya doin?” This is the attitude I have to remind myself to take. Sanguinity.

Going back to Jeff’s Bike Blog for a minute… I have a strange fascination for these instances of gratuitously bad driving where cyclists are almost killed or maimed. Maybe I like looking at this sort of thing because it re-inforces my smugness. Sometimes I feel like I get too much of a thrill from righteous indignation. It’s almost like these tales of motorist ineptitude (like every cyclist’s favorite bogeyman, Martin Erzinger), are a form of pornography. I can read through the comments section of these articles and feel an arousal in my ire region. I should give up this filthy habit in exchange for  looking at that other type of bike porn: pictures from the North American Handmade Bicycle Show! 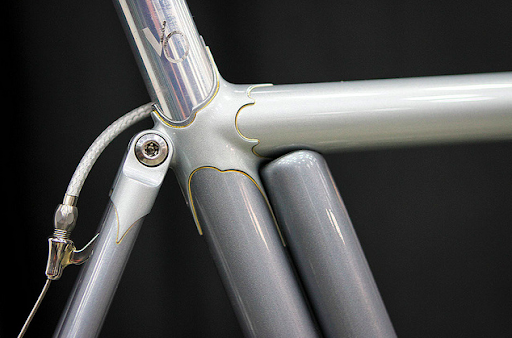 photo by John Prolly of prollyisnotprobably.com 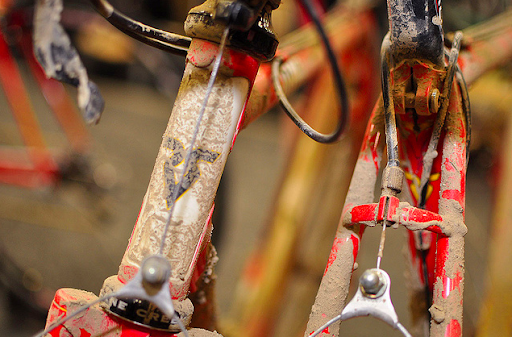 photo by John Prolly of prollyisnotprobably.com

This entry was posted in Honk Report, media coverage of cycling. Bookmark the permalink.