Well, Spring is kind of here. It’s been raining more than snowing, so at least we’ve got that going for us. My cycling miles have picked up a bit as well in the last couple of weeks. As previously mentioned, I’m back on the Cannondale for most of my trips (after a month exclusively on the Raleigh), but I still manage to get some time in on the old 3-speed due to all of the rain. Let’s compare January and February. 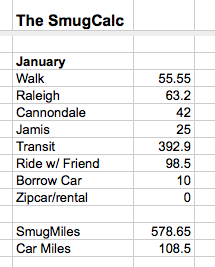 That’s a lot of walking! A good chunk of it came from a trip to NYC in the middle of the month. I always seem to walk the length of Manhattan while I’m there. This trip also accounts for the large number of “transit” miles. Maybe I shouldn’t count “taking Amtrak to New York” under transit, but hey, I’m making up the rules here so… too bad. I got rid of “total cycling miles” as an automatic category and replaced it with “SmugMiles” so I could directly compare the total of walking, cycling and transiting with the total of miles spent in an automobile. Also, this method allows me to feel more smug, and that’s really what this whole exercise is about. Now, I have to do a little spreadsheet addition (that is, shift-selecting a few cells) in order to find out how many miles I’ve traveled by bike. And that’s a round-about way of saying that for January, it was 130.2. 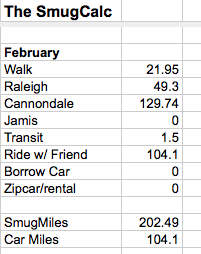 For February, I biked just less than 180 miles. I believe that there were only about 25 cycling miles out of both months that could be considered purely recreational (although I managed to squeeze in a trip to Wal-Mart on that ride). I’ve also noticed that I haven’t been on the Jamis in almost 2 months! I just don’t feel like taking it out on the sand and salt covered roads.

Let’s take a look at the big board: 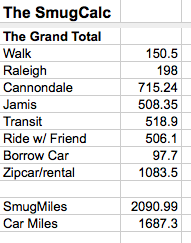 This is a running total from 8/21/11 which as a faithful reader you recognize as the one year anniversary of my car-freeness. It’s interesting to see that over 1/3 of my walking miles came in January. I hope to see these numbers really take off once the roads clear a little more and I can get out for some rides on the weekends.

Along with increased mileage for me, another sure sign of spring is the increasing number of cyclists I see on the roads. It’s been very noticeable in the past week as I see more sidewalk riders, stop sign runners and everywhere I turn: salmon, salmon, salmon! Seriously, I can kind of understand going the wrong way on a one way street. People have a mistaken perception that it slows them down too much to go around the block, but if you are going to bike up on the wrong side of Hope Street at night with no lights, maybe you would just be better off on the sidewalk (actually, you would be better off on the right side of the road with lights). I haven’t yelled at a salmon yet. I’m not sure it would really do much. I just grit my teeth and remind myself that I used to do it too and one day they will understand that it really doesn’t save them any time.

I recently went to the South Side Community Land Trust Urban Agriculture Spring Kickoff at the Roger Williams Park Botanical Center. There were talks on composting, urban chicken raising and other things to help increase one’s smug quotient. Despite the fact that there was no bike rack, there were many bikes parked at the event. 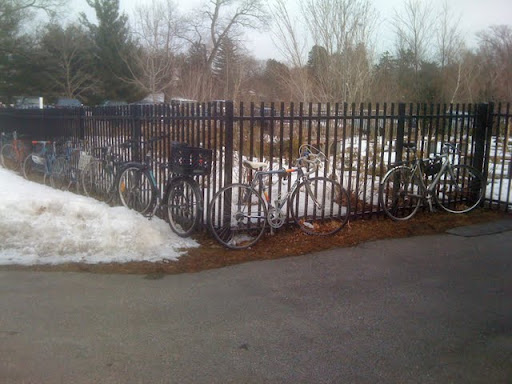 My silver steed is on the far right, and the third from the right is a classic Bridgestone CB-1 with a milk crate to make it look more stealth. Also spotted: 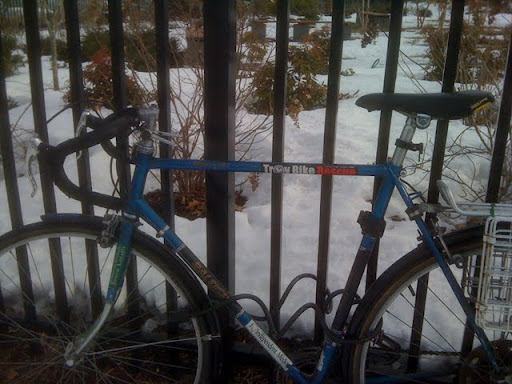 A bike from famed bike collective: Troy Bike Rescue, almost 200 miles away. Evidently it is owned by a recently transplanted Trojan. Let’s hope he joins us at Recycle-A-Bike. Speaking of Recycle-A-Bike, we recently had a work party, tearing down the shop in preparation for our big move to a new location. 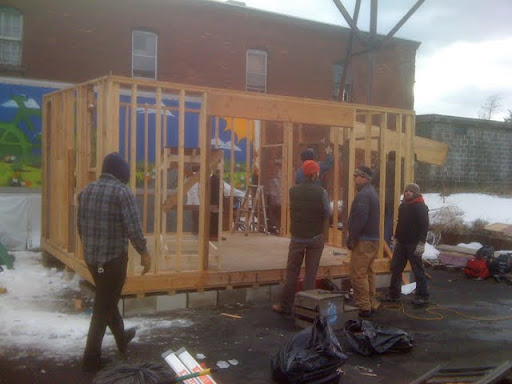 The uninsulated, unheated shop just wasn’t working out so well since it meant that we pretty much had to shut down all programs for at least 4 months. But even though the shop has been shut, one of our mechanics has been very busy rebuilding bikes to sell to help fund operations. And even though it was a miserable winter, he’s managed to sell a few bikes. You can find some more at RAB’s goodsie shop. There are some good deals there, far better than what might come out of some guy’s basement and end up on Craigslist.

Alas, not all bicycles can get the tender loving treatment that Recycle-A-Bike gives to the bikes that come into our bike shelter. Some bikes are abandoned on the streets by their owners. It makes me so sad to see perfectly good bikes left outside to the elements for months at a time.

There’s nothing too special about this red 3-speed Schwinn. 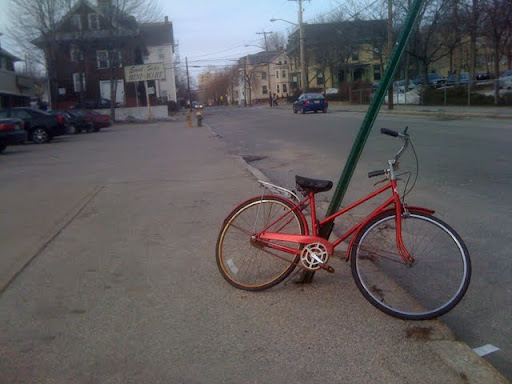 But does it deserve to be left to rust in front of a police station?

And this Raleigh, outside in the rain, slowly oxidizing, its leather saddle crumbling like the caked sands of Death Valley. 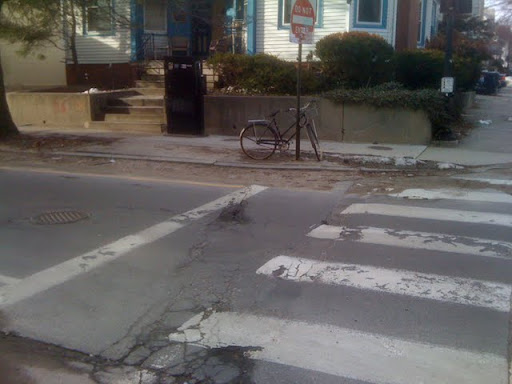 It even has a rack and front basket that would fit well on my Raleigh (grumble grumble).

And finally, for weeks this Bottechia road bike was buried beneath a pile of plowed snow. Now it has emerged with a completely rusty chain, but all it needs is a little bit of TLC to get back on the road. 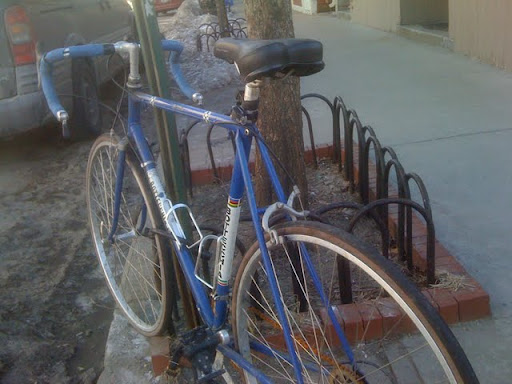 I took the picture about late last week and when I went by this evening, I found this: 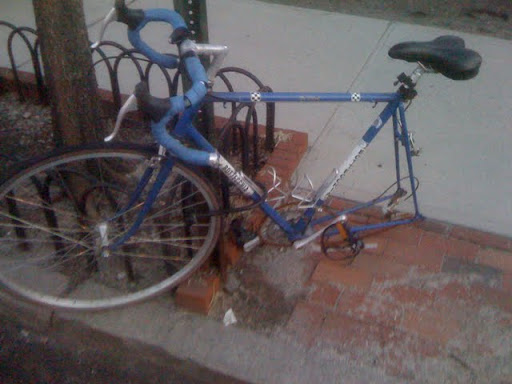 It could have been transportation for someone, but now, it’s just junk on the sidewalk.