Many moons ago, I had a negative interaction with a RIPTA bus driver while riding my bike. You can read account #1 and account #2 for the full story. When riding my bike, I am passed by RIPTA buses all the time. I probably share the same space with RIPTA buses a few hundred times in a year, and I very rarely have any sort of negative experience. In fact, I was just praising RIPTA for providing SAG Wagon services to me when I had a pinch-flat. Now that I am injured, RIPTA is my main mode of transportation. I’m really digging the Easter-themed colorway on the April RIPTA pass: 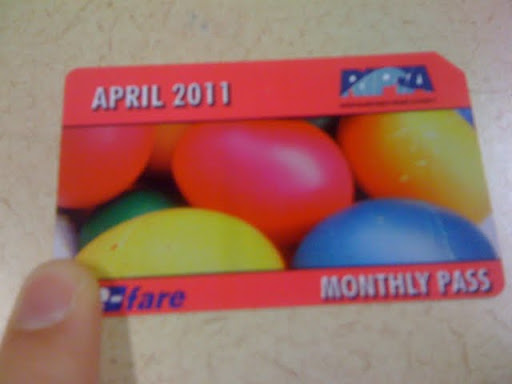 I’ll be reporting more on my RIPTA experiences in the next month. In fact, I already kvetched about the lack of signage for the RI Hospital bus stop. And since a blog post wasn’t enough of a complaint, I decided to up my kvetching game with some Web 2.0 action and dropped a wicked tweet-kvetch in RIPTA’s general direction:

To my surprise and delight, @RIPTA_RI responded:

So now I know. Instead of calling the RIPTA customer service line, and following up with an email, the next time I’m harassed on the streets by a RIPTA driver, I’ll just tweet them.

By the way, I’ve greatly increased my tweeting lately. If you aren’t one of the over one dozen people or spam fronts following me on twitter, I suggest you get with the program and follow @carfreepvd !!! Or you could join the almost 100 people following @RIPTA_RI.

Speaking of spam. I expected spam comments when I started this blog, and wordpress does a good job of catching them. But I never expected spam referrals. I’m getting all sorts of .cz addresses showing up as referring to this blog. And it’s totally messing up my stats. I need to know if I’m reaching 20 readers, or 10 readers and 10 spambots. This is very important!

This entry was posted in RIPTA and tagged RIPTA, Twitter. Bookmark the permalink.