The Petty Abuse of Authority

I really don’t have much to complain about in my life. I have a wonderful Spouse who (among other things) takes care of me when I’m injured. I have a good job working with talented, dedicated people. I like the neighborhood I live in. I derive great enjoyment from my chosen method of transportation (well, most of the time).

Along with the often referenced Maslow’s Hierarchy of Needs, I sometimes feel like there should be an inverse of this principle. For sake of simplicity, let’s call it Costanza’s Lowerarchy of Gripes (in honor of the Seinfeld character, whose parking philosophy was recently referenced by none other than Donald Shoup). If you can’t complain about a lack of food, shelter, loved ones, then you can move on down to whining about petty things. 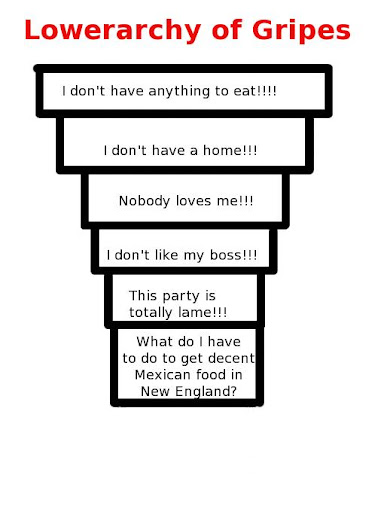 So that’s what I’m doing. Few things aggravate me as much as vehicular bullying and petty abuses of authority. Here’s a recent one that’s been making the rounds of the cycling blog-a-spear:

Cop Nearly Doors Cyclist, Then Chases and Arrests Her.

Thede …was biking home on Sunday around 6 p.m. when the driver’s side door of a double parked black car popped open suddenly on Amsterdam between 76th and 77th Streets. “I had to brake so abruptly that a delivery biker behind me ran into me,” says Thede. “I had a verbal exchange with the driver in which I told him to watch what he was doing.” Then she rode on, but soon realized that the guy had gotten back into his car and was zooming up behind her. She still had no idea this man was an officer of the law, and the situation devolved from there…

I recommend reading the whole story if you want your blood pressure raised.

Here’s a little video of another member of New York’s finest just generally being a dick:

Granted, the Chilean coal miner that’s talking to him is kind of being a dick as well… 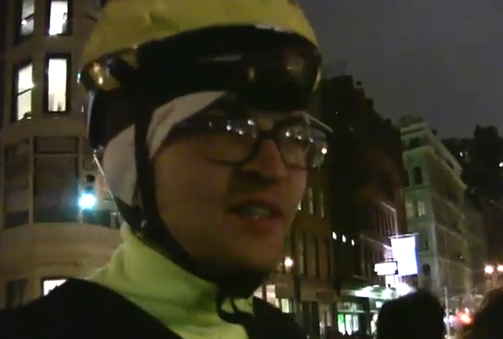 … but that’s not much of an excuse for a legal representative of a police department to be jerk. And I’m not much of a fan of Critical Mass, as previously explained.

A constant complaint I have in the winter is the lack of sidewalk shoveling in Providence (and I’m not alone in this complaint). Since we’re out of unshoveled-snow-blocking-sidewalks season, I can complain about a car I see parked most weekdays in Kennedy Plaza. ON THE SIDEWALK! 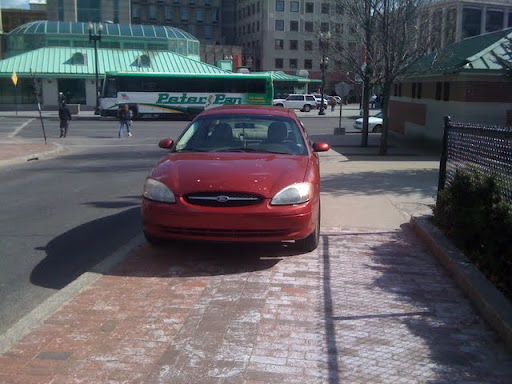 Whenever I see this car, it’s always parked on the sidewalk directly east of the ice skating rink. There’s a little park on the other side of the skating rink. And by “park” I mean “place to park cars.” 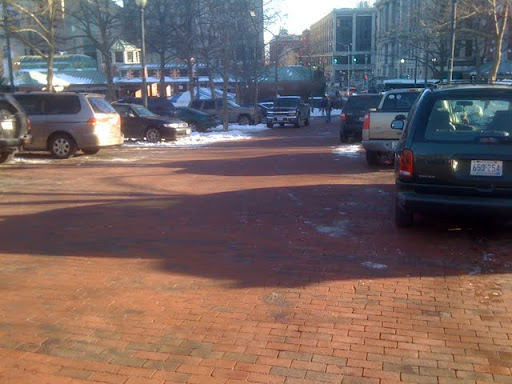 These cars aggravate me as well, but there are several signs indicating that parking is only allowed for those with a permit, so I guess it’s actually a parking lot. But parking on the sidewalk for hours at a time? What is this, Madrid? Here’s a reverse angle: 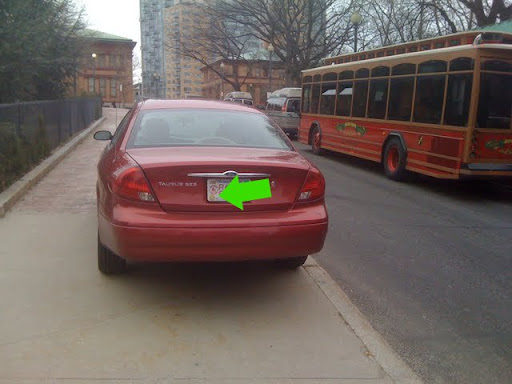 That’s a Massachusetts plate on this car parked on a Rhode Island sidewalk. It wouldn’t really be any better if it had RI plates, but it is extra irksome to me for some reason. I’m using the green arrow there in order to block out his license plate number, although if you want to know it, you can find this car pretty easily. I’m also using the arrow to point out something on the plate. No, not the fact that it is a Red Sox/Jimmy Fund special plate. ENHANCE! 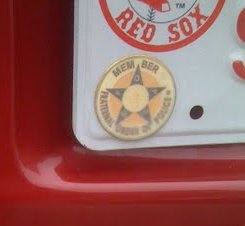 Looks like the car belongs to a member of the Fraternal Order of Police. So now we know who gets to park on the sidewalks of Providence. And now it’s time to update Costanza’s Lowerarchy with my latest petty gripe. 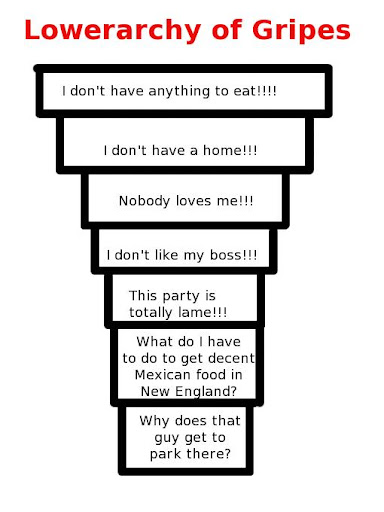 This entry was posted in Uncategorized and tagged parking on the sidewalk, providence police. Bookmark the permalink.

4 responses to “The Petty Abuse of Authority”