May is officially Bike Month and as a hardcore bicycle commuter, it is my duty to curmudgeonly and smugly declare: “For me, every month is bike month!” As a self-aware bike blogger it is also my duty say “Bike Month is not meant for me, it’s meant for those who could be goaded into biking more!” And thus I shall try to goad you, with a personal tale.

It’s easy for me to say that I’m a hardcore bicycle commuter now. Sure, I’ve been out of commission for the last 6 weeks, but before that, there were only 8 days this winter that I did not ride my bike due to bad weather. Actually, it was more due to street conditions, but those were the result of weather, so let’s just call it weather. Rain doesn’t bother me, snow doesn’t bother me, and because I’ve lived in Edmonton Alberta, I laugh in the face of the coldest temperatures that Rhode Island can throw at me. Sure, my coworkers are impressed when I roll into work wearing snow pants, lobster gloves, a balaclava and a face mask, but I wasn’t always this hardcore.

When I lived in Springfield, MO [shudder] I drove to work, even though it was less than a mile away. When I lived in Boston, sometimes I drove, sometimes I took transit and sometime I biked. Basically, I rode my bike only in good weather. If there was a chance of rain or if the temperature was below 40 degrees, I took my car or the T. When I moved to Edmonton, I became a full-time bike commuter. I wasn’t making much money at the time and when I learned that parking my car at work for the day would eat up more than an hour’s wages, I figured it didn’t make much sense to drive.

My transition from full-time automobile commuter to full-time bike commuter took about 7 years. I dimly remember someone mentioning “a bike to work day” at some point during my Boston years, but I’m not sure it made much of a difference in my biking habits. I didn’t jump straight from my car to my bike. It took a while for me to get used to the idea, so I should expect it to take a while for everyone else. And that’s what Bike Month is about. I recommend giving it a try – one day this week, maybe two days the next week. Maybe stay at two days for a while. Think of how much a tank of gas costs and then think of what you could do with that money. You don’t have to jump in with both feet, selling your car and buying hundreds of dollars in gear. Almost any bike will do for a short ride. Sometimes I think that we spend too much energy trying to get people to bike to work. Instead of biking to work, think of what destinations are less than 2 miles away: the grocery store, pharmacy, liquor store, coffee shop? Put on your backpack and pedal your way down there to pick up a few things. Get yourself an extra muffin as a treat. Besides, it’s been a long, cruel winter….

But now it’s May! There are flowers! 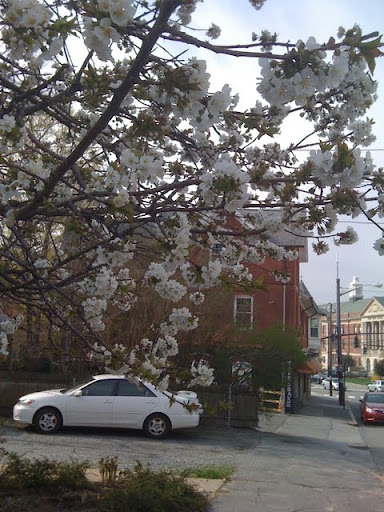 And many more bikes locked up at neighborhood bike racks: 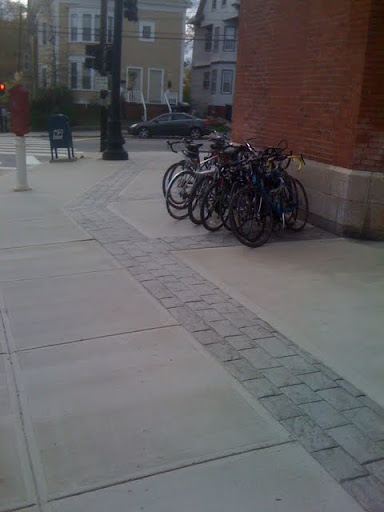 This rack is usually completely empty. It's nice to see it full of bikes.

And many, many more bikes on the street. It’s always nice to see them rolling past me as I wait for the bus. It’s not always so nice to see someone inexplicably riding on the wrong side of a narrow two-way street (Benefit in this case). The young salmon was going about 7 MPH on the left-hand side of the road. I almost took a picture, but I was afraid I would catch her getting hit. Instead I saw several cars get very close to her before the drivers realized that there was a bike on the wrong side of the road. No one honked, strangely enough. 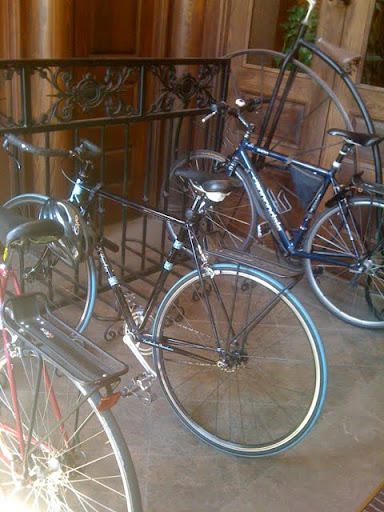 One of the visitors (the bike in the middle) arrived on a Circle-A (a local Providence frame builder). Just like all Circle-A’s it had a sweet custom paint job. I was perplexed by the less attractive  rack on the back. I’d think if you are buying a custom frame you could splurge a little bit on the rack. On the near side we have an early 90’s Bianchi (I’m guessing at the age), and on the far side, a Cannondale Hybrid of unknown vintage – I’m guessing it’s fairly new since it’s not plastered with “made in the USA” decals like mine is. As always, our friend the old Pennyfarthing, guards them all.

For me, my collarbone continues to mend, but I’m still a few weeks away from getting back on the bike. I visited the doctor for a follow-up visit which yielded this new X-ray: 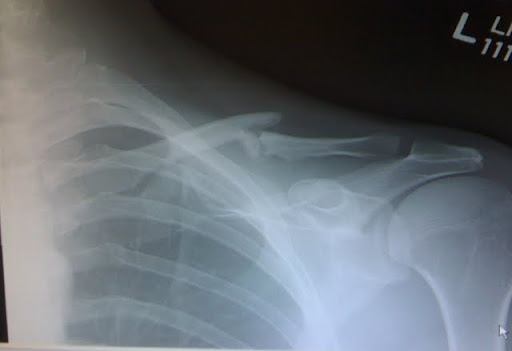 They tell me that it’s substantially different from this one: 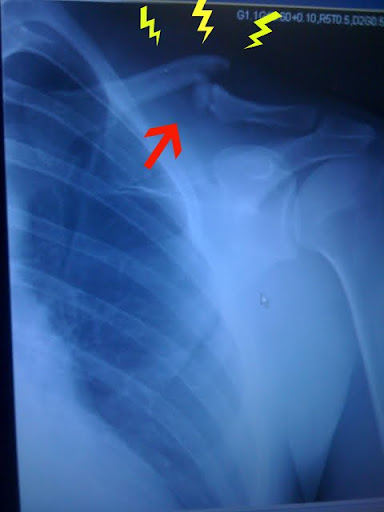 Evidently, there’s some new bone stitching together the break, but I always have a big bump there. Plus the lightening bolts of pain are gone.