A special new feature for Car-Free in PVD

Wow, who knew that a post about sharrows would be so popular?

Although sharrows are great, if there’s one thing this blog is famous for, it’s pictures of bike parking. I know it’s why so many of you read this blog again and again. You just can’t seem to get enough tales of bad bike parking and pictures of same. Of course, sometimes, cyclists do it to themselves by making some bad parking choices. Example A: 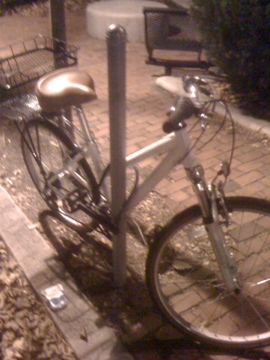 This bike was parked like this for at least 24 hours which means that the owner was either lucky, or the bike thieves in Providence have very good taste, because I recently saw it parked not far from the previous spot, but this time, the owner locked to a post that actually had something at the top of it. 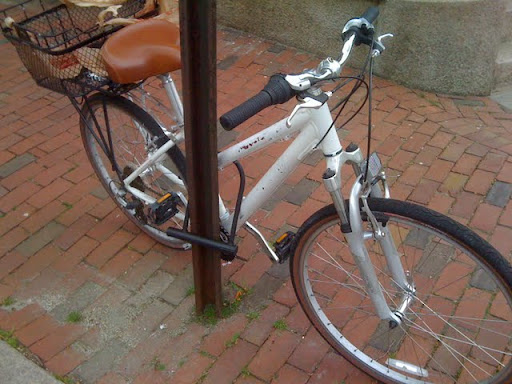 I’ve seen so many poorly locked bikes lately, I think these examples need a special recurring feature on my blog. And thus I present to you:

Hopefully that will bring a few more hits via the search engines!

The white comfort-cruiser was spared from theft, but I wonder about this bike I documented a few months ago: 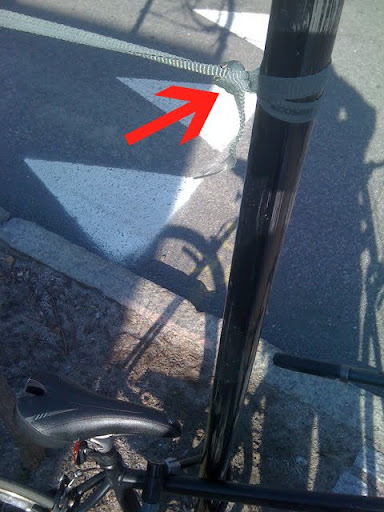 The bike was no longer there the next time I rode by, but I noticed that the knot had not been removed, so I can only assume that the bike is safe.

Before I spend too much time criticizing others, I should confess that I too, have fallen to the temptations of barely locking my bike – mostly by accident. There were several times when I lived in Alberta where I would come out of my office to find my bike with just the frame locked to the wheel, comfortably leaning against the bike rack. We call this a “threading” problem. That is, the lock was threaded through my bike, but not the bike rack. Now that I have Pinhead locking skewers, I haven’t made this mistake because I only need to thread the lock through my bike and the rack. However, after an injury-induced 10-week cycling hiatus, I’ve had more than a few suspicions that I failed to properly lock my bike. This usually happens at work, about an hour after I arrive, I start thinking that I may have inadvertently left my bike unlocked. I’ll casually make my way to the lobby and take a peek, pretending that I’m just checking on the weather. No mis-threading yet!

Some people don’t seem too concerned about mis-threading because they don’t even lock their bike to an object, they just lock the wheel to the frame and lean it against a wall. Presumably, they only do this “for just a sec.” 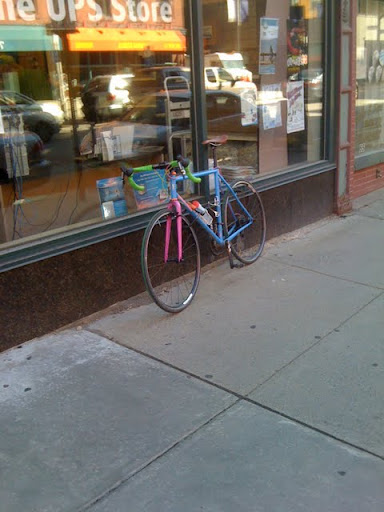 Sometimes they do this with rather expensive, custom-made cyclocross racing bikes. This is known as “free-locking” as in “there may be a lock attached to my bike, but it is free for the taking!” This seems to be popular amongst bike messengers (yes, there are a few in Providence), and since so many of them do it, people seem to respect the free-locked bikes around town. 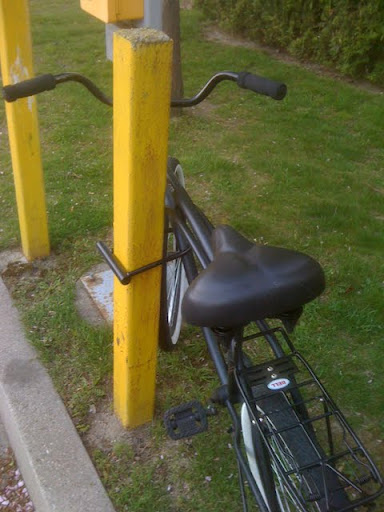 Remember, when locking your bike to a post, be sure that there is something on the top of the post that will prevent thieves from simply lifting your bike off of the post. Nearby, I saw a bike locked to a post with a “Reserved Parking” sign. It was good that they were locked to a post with something on the top of it, but bad that the post was stuck in the dirt. Nearby, I saw a similar sign post laying on the ground. My guess is that someone pulled it out in order to take a bike locked to it (or to park in a reserved spot with impunity).

That’s all I have for BARELY LOCKED right now. But I’m sure that there will be many opportunities for this feature in the near future. Look for it in truck stop news stands everywhere.

I can’t close a post featuring so much bike parking without complaining about the lack of bike parking at major chain stores, right?

What kind of store sells this many bikes…. 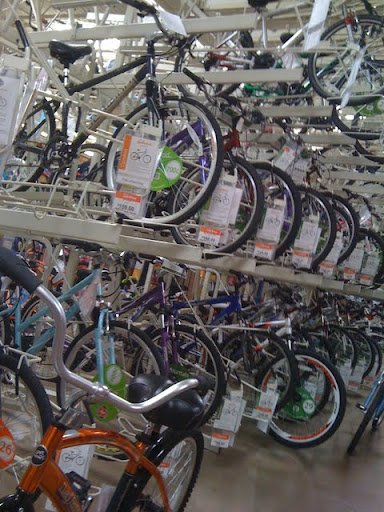 …. has this many handicap parking spaces…. 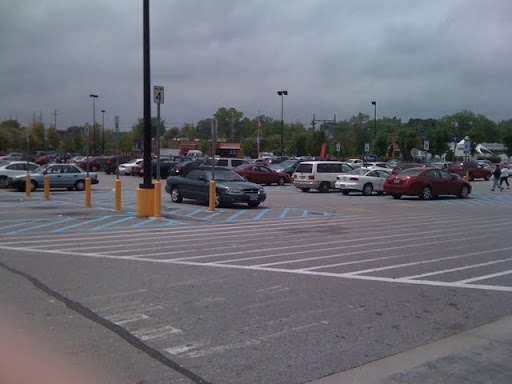 …. and offers no bike parking for customers or employees? 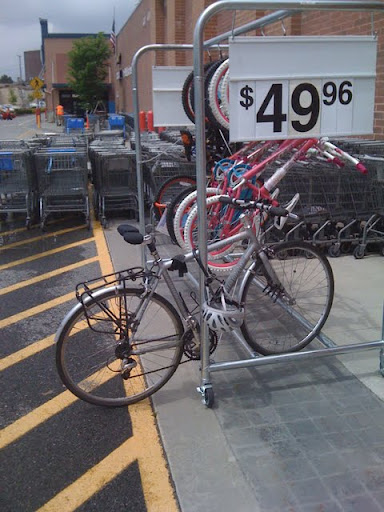