Because I am the single most important bike blogger in America’s smallest state, people often ask me questions about their bike needs. Since I don’t bother with things like a contact link on this blog, nor do I publish an email address, my minions must contact me via twitter with their questions (or, I suppose they could use the comment feature of this blog, whatever works).

Here are two recent twitter questions or as they are sometimes called, “twestions.”

Okay, so these are the only two twestions I’ve received in a long time, but they came on the same day, so I figured I should answer them. I’ll answer @matthewcoolidge’s question first:

I don’t use any route apps for smart phones. Occasionally, I’ll check out mapmyride.com or veloroutes.org for route ideas. I’d been out that way before, so I kind of know the lay of the land. Before I set out, I looked at google maps and made a general plan of where I’d go. I then stopped frequently and looked at the map to check where I was and make adaptations based on how tired I was and how much time I had left. For this ride, I had hoped to do 62 miles (aka 100 KM, aka a metric century), but I was quite feeling up for it, so I opted for 50 miles instead.

For those who missed the previous post, here’s an overview of my route: 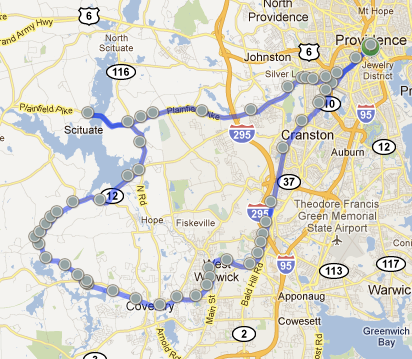 I went back to mapmyride.com and re-plotted the route to reflect the route I should have taken. That is, I should have not made that wrong turn off of Plainfield which led me to an interesting section of Silver Lake. It wasn’t bad, just kind of slow. Map My Ride indicates that this route is merely 38.69 miles, but it doesn’t know about the couple of wrong turns I made, plus I took a long way home at the end to insure I got up to 50 miles because… it was important to do so. My route is available for all to enjoy HERE.

After plotting out that route, I spent about an hour plotting various options for longer rides out into western RI. I’d like to have a ride that includes a pit stop at some sort of pancake-serving establishment. Any suggestions?

On to @stephaniedoes’ question. Tonight, I participated in the Rhode Island Bicycle Coalition’s “Light Up The Night” event. I stood on a street corner and installed lights on bikes for cyclists who did not have lights. It was fun, and it helps to reduce the number of “bike ninjas” out there. I don’t like bike ninjas, I like to be able to see other cyclists and I want the motorists to see them as well.

So, @stephaniedoes, what kind of bike lights do I recommend? Well, there’s really a whole range. First a recommendation of what not to get. I am not fond of the little rubberized single LED lights that wrap around the handlebars, like these made by Knog: 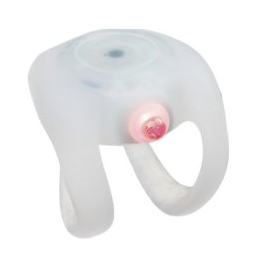 Tonight, we were handing out the Planet Bike Blinky Safety: 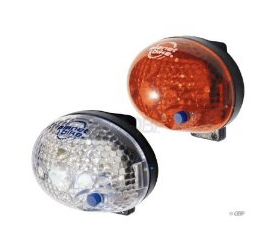 These is a decent, basic “be seen” type of light set. It won’t help you see anything on a dark street, but it will help motorists see you. There’s a single LED in each light, but it gets the job done. These cost about $20 for the set. They run on flat watch-type batteries that can be purchased in any drugstore.

A few years ago, I bought the Planet Bike 1/2 watt Blaze/Superflash Combo. 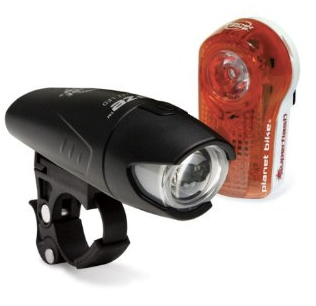 This is probably one of the best values out there at about $55 for the set. The headlight on the flashing setting will get you plenty of attention from motorists, or you can turn it to a steady beam on darker streets. It won’t give you a great light pattern, but it’s good enough for most city streets. The taillight has two small flashing LEDs plus one mega-bright strobing LED. Motorists can see these a mile away, and they should definitely notice you up close. These lights have seen plenty of abuse from rain & snow, and I’ve dropped them a few times and they are still going strong. However, I’m a bit of a geek, so I opted for a stronger headlight last year and got the.. 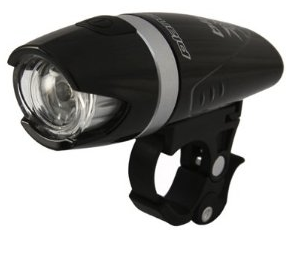 I know, it’s silly, but I do like this light better. If I’m not careful about how it’s aimed, motorists will flash their high-beams at me because they think it’s too bright. Too bad, I like to be seen. This can be set to low power steady, high power steady, or strobe which flashes twice at low power followed by a bright flash at high power. It’s awesome. So awesome, that somebody stole it off of my bike while it was parked in the vestibule of my office building. I immediately ordered a new one.

There are many light options out there. As you can see, I’m partial to the Planet Bike brand. Other brands that seem to be good are Princeton (makers of the Tec Swerve), Portland Design Works, Blackburn and CatEye. There’s a few that are rechargeable via USB, which is kind of neat, and others that work off of external battery packs. I think those are more for the people who ride in places without streetlights. Of course, the retrogrouches in the audience would be disappointed if I didn’t mention dyno-hub generators and the lights that go with them. These work off of a generator in the front hub that uses the spinning wheel to generate electricity to power the lights. They’ve improved greatly in the last 10 years, but are still far more expensive than battery powered LEDs.

So, who’s up for a metric century later this month?

17 responses to “Answers to tweets”