I was about to duck in to a local coffee shop when I saw this sign on the front door: 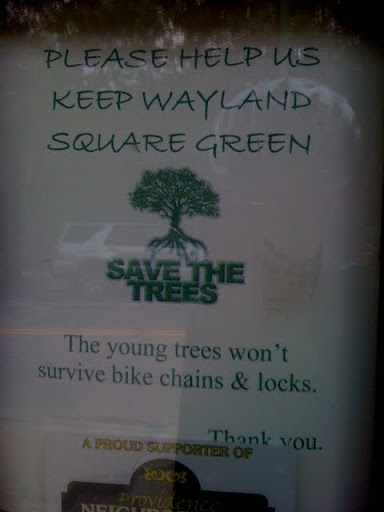 I agree, it’s a bad idea to lock your bike to a young tree. You can scrape the bark, break a branch, or a thief can come along and break the tree and take your bike. However, there aren’t any bike racks at this coffee shop. In fact, there aren’t any bike racks in the general vicinity. The shop is in a small shopping district known as Wayland Square. It’s full of small, independent shops and restaurants (and one Starbucks). There’s also plenty of on-street car parking and a couple of off-street lots. In fact, this coffee shop will help you pay for parking your car in one of the lots: 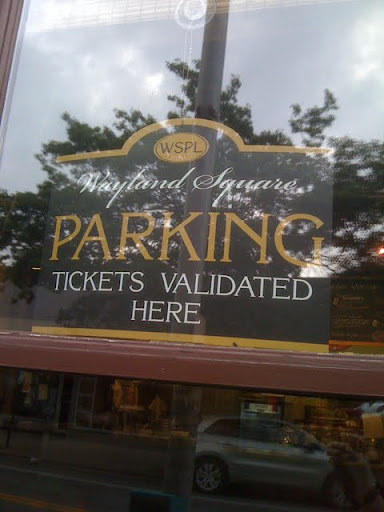 I’ve taken a car to this square a few times (from back when I owned a car, or when I’ve been driven by friends). Whatever car I was in, we always managed to find an on-street space within 2 blocks of our destination. When I bike to this square, I usually make do with locking my bike to a parking sign.

Not the ideal solution, but it gets the job done. By the way, this picture is from over a year ago when I last complained about the lack of bike parking in Wayland Square. I’d like to see this situation improved, but I’m not sure how to go about doing it. I didn’t like the lack of bike parking at the Farmers’ Market, and now Recycle-A-Bike has a program that has helped to alleviate that (thanks to dedicated volunteers like Kim & Mary!) I don’t think that the bike parking demand in Wayland Square is high enough to justify bike valet. I emailed one of the restaurants last year and he basically said “our landlord doesn’t want to do it.” I emailed the landlord and got no response. A couple of days ago, I emailed the coffee shop in question and I have yet to receive a response. I also posted on their facebook wall about the issue – no response their either (granted, their last facebook activity was about a month ago…) I’d prefer to use a positive approach rather than approach the businesses with a gripe – and my email certainly had a positive tone to it. And yet… no response. So, has anyone else had any luck getting businesses to install bike parking?

UPDATE: The Cafe in question now has bike parking, within 3 weeks of my public shaming! Coincidence? You be the judge.

I almost forgot, a motorist honked at Spouse and me on Monday evening. We were riding down Hope, actually keeping up with traffic for most of our entire route. We then signaled a left turn onto Lafayette Street (yes we use turn signals!) and pulled to the left of the lane. We had to wait for several cars going in the opposite direction before it was safe to turn. A motorist honked at us as she passed on the right. There was plenty of room to do so, I’m not sure why she honked.  I responded with a cheerful yell of “honk honk!” back to her and then muttered to myself under my breath.

I will continue to dutifully record such incidents in my honk report log. I got the idea for the honk report from Andy Cline over at Carbon Trace. He started it to document how rarely motorists honk at him. Motorists seem to honk at me much more often. And I always seem to be doing something completely legal when someone honks at me.

The other day, NY Times had an article on a cycle tour through the four corners area of the US.  BikeSnobNYC  tore into it before I had a chance. The only thing I have to add is – check out the creepy picture that came up on the bottom of the page:

The photo linked to an article about O magazine, the magazine that features a picture of Oprah on the cover every month. I was so creeped out by the picture that I didn’t bother to read it.

Night Riding: Back from Bristol (and Beehive Cafe review)

Saturday was the last day of moderate temperatures before an expected heat wave (looks like 5 or more days of 90 degrees plus!) Spouse and I decided to make the best of it by meeting a friend for some afternoon activities near the East Bay Bikepath. First, we biked to the Tillinghast Farm, popularly known as the “RISD Beach.” This was a farm along the Narragansett Bay that was donated to the Rhode Island School of Design for use by the staff & students. Because Spouse works for an affiliated institution, we are allowed access to it as well.  Theoretically, you need to have an ID from said institution, but nobody is checking IDs at the gate. There is a lack of bike parking, but Spouse and I made the best of a wooden sign post.

Our friend brought her dog, who was much in need of some quality beach time. I’m not sure if I’d want to swim at this beach – the bay is still a little too polluted for my taste – but it’s a pleasant beach for walking along and watching a big dog have fun in the waves.

Aside from the traffic, one thing I hate about the EBBP is the many road crossings you have to slow down for as you ride along. There’s a stop sign for cyclists posted at each crossing, even for the places where the path crosses an industrial access road that is blocked by a gate. For some of the crossings, one needs to actually stop, but it’s difficult to know which ones. Now I have a new thing to hate about the EBBP – there’s no street signs for the crossings. It was very difficult to know where we needed to turn off from the bike path (Middle Highway) in order to get to the farm. We were smart enough to check it out on Google Streetview ahead of time so we knew to look for the crossing that has five big rocks. But still, there were several crossings before Middle Highway that looked very similar. This shows a basic problem with the philosophy behind bike paths – they are often built with the idea that they will be used solely for recreation, not transportation. You don’t need to know what street you are crossing, cyclist, because you should just stay on the path where you belong, then turn around and go back to your car, put your bike on the back and drive home! I’m sure that 90% of the people on the path on the weekend use it for recreation (unlike my coworker Jim), but still – they should be able to know what street they are crossing so they can find their way to destinations off of the bike path. There’s also a general New England problem with street signage. New England cities are notorious for tiny, poorly placed (or completely absent) street signs, thus making the non-grid streets all the more confusing to outsiders. Okay, enough of that rant.

After a little bit of beach time, we headed down to Bristol for dinner. For the outastaytas in the audience, Bristol, RI is the home of the nation’s oldest continuous 4th of July parade (since 1785). Spouse and I arrived to find the area full of pre-4th revelers enjoying and outdoor concert. Luckily, our dinner destination was not too full. Our friend with the dog used her car to get to Bristol and arrived at about the same time we did since there was so much traffic. We ate at the Beehive Cafe,  a lovely little restaurant near the harbor. The food was delicious, and if I was a better blogger, I would have some great pictures of the three of us enjoying our meal on the patio while the dog enjoyed the cool concrete. I think Miss Sarah in Edmonton does the best job of this sort of thing. I had a great Aquidneck farms burger. Spouse had some chunky-style gazpacho and a Mediterranean plate with all sorts of goodies. Our friend had the 4 cheese penne pasta. We then shared some strawberry-rhubarb pie. Everything was excellent, and reasonably priced for the quality. I felt like my burger was of the same quality that I would get at La Laiterie, but significantly less expensive. Everything on Spouse’s Mediterranean plate was of the highest quality. In describing the plate, Spouse said that each individual item could have been sold for $3-4, so it was a good deal as well. Enough with the restaurant review! I’m just including it as an attempt to draw some search engine hits. And to show that you can use a bike to get to a restaurant that is about 18 miles away. (One more thing, they have a decent beer list – very refreshing after cycling in the heat).

As we wrapped up our meal, the light was beginning to fade. Our friend had left her bike rack on her car in case we wanted a ride home. Spouse decided to take her up on the offer, but as you know dear reader, I’M WAY TOO HARDCORE TO ACCEPT THE OFFER OF A RIDE!!! Actually, the temperature was unstoppably pleasant and I wanted to see what it was like to ride on the path at night. The sun had just gone down as I set out on the path. There were a few other cyclists early on, but they thinned out to nothing within the first 5 miles. I was completely alone on the path. Except for a few million bugs. At first there was just the occasional swarm that I would ride through, but eventually, it was an almost constant barrage of bugs. I was sure to breathe through my nose, and through some miracle I avoided eating any of them. The bug gauntlet was  worth it as a trade off for an empty path. Without any of that pesky traffic, I was able to keep a very steady pace (aside from the road crossings) and I hardly coasted at all. Time seemed to stop as I chugged along on the path, collecting bugs on my shirt. I can see why some people prefer a brighter light than what my Planet Bike 1/2 watt has to offer. I often felt like I was straining my eyes and it would have been nice to make the tree tunnels a little brighter.

As I approached the northern end of the trail, a fireworks display started in a nearby town. At the top of the final hill, many people were pulled over in their cars to watch the display. A few decided that the perfect way to watch the fireworks was to sit on one side of the bike path. I had to slow down to about 6 mph to get past them. A few times I had to yell out “excuse me” to the people standing in the middle of the path staring slack-jawed at the sky.

It was quite pleasant to ride the path at night. I hope to do it again, but I may have to get a bike like this just to avoid the bugs.