The New York Times is somewhat infamous for its “bogus trend” stories. Jack Shafer at Slate.com loves to write about these sorts of stories. All you really need are three examples, and wha-lah! le trend. (next one: misspelling french). These stories really stick out on the Times’ website because they run next to and look just as legitimate as a story about the economic conditions in Greece. However, they are a little less egregious nestled into the Style section with coverage of some band that records an album in a Central Falls warehouse or whatever. Worse than the “bogus trend” story is the “I’m going to make up a medical condition based on one study that I kind of looked at, even though I’m a journalist and not a doctor.” I present to you, from Jenny Hope at the Daily Mail: 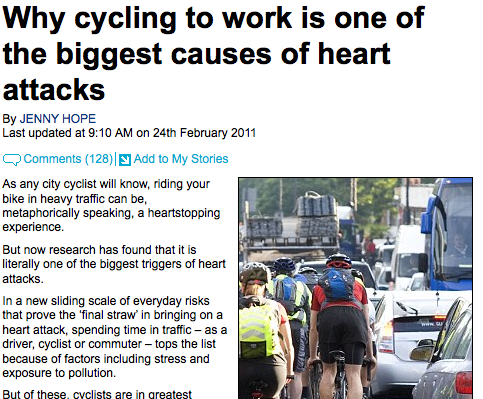 The article cites a study about the “final straw” risk factors in triggering a heart attack. Some of the worst of these include: commuting in traffic, breathing polluted air, and strenuously exercising. It’s the reporter who came up with the idea that bicycle commuting must be the most dangerous thing because it combines so many independent risk factors. Of course, there’s nothing about bicycle commuting in the study… I think the author mentioned bike commuting just to troll for comments on the article. And of course, it this trolling was successful. I only scanned the comments, because they seemed to quickly get into a bullshit back and forth about cyclists not having a right to the road because they don’t pay “road tax” (this is in the UK, BTW). If you don’t know why this argument is bullshit, please leave a comment below.

There was one particular comment that caught my eye:

So … the problem is that pollution in our cities is increasing the possibility of heart disease? And low levels of fitness are also increasing this? Hmmm if only there were some way of reducing the amount of pollution whilst improving peoples fitness levels. Any ideas, anyone?

This comment perfectly illustrates how bike commuting does not put cyclists at risk of a heart attack: our own smug sense of self-importance helps to create a protective layer of positive “vibes” encasing our heart, and ensuring its proper function. Plus, we’re like in hella good shape.
If Jenny Hope was just combining a few random “final straw” heart attack triggers, I think she really missed the obvious:
Other risk factors included negative emotions (3.9 per cent), anger (3.1 per cent), eating a heavy meal (2.7 per cent), positive emotions (2.4 per cent) … sexual activity (2.2 per cent)… cocaine use (0.9 per cent).
So the real risk factor for a heart attack is

Posted in Cycling and the law, media coverage of cycling, Real Commuting